In the last posts I talked about the tools people used in monitoring, the demographics, and what environments people monitor. In this post I am going to look at the questions around collecting metrics and what those metrics are used for by respondents.

As I’ve mentioned in previous posts, the survey got 1,116 responses of which 884 were complete.

Question 7 asked if the respondents collected metrics. It was a Yes/No question. 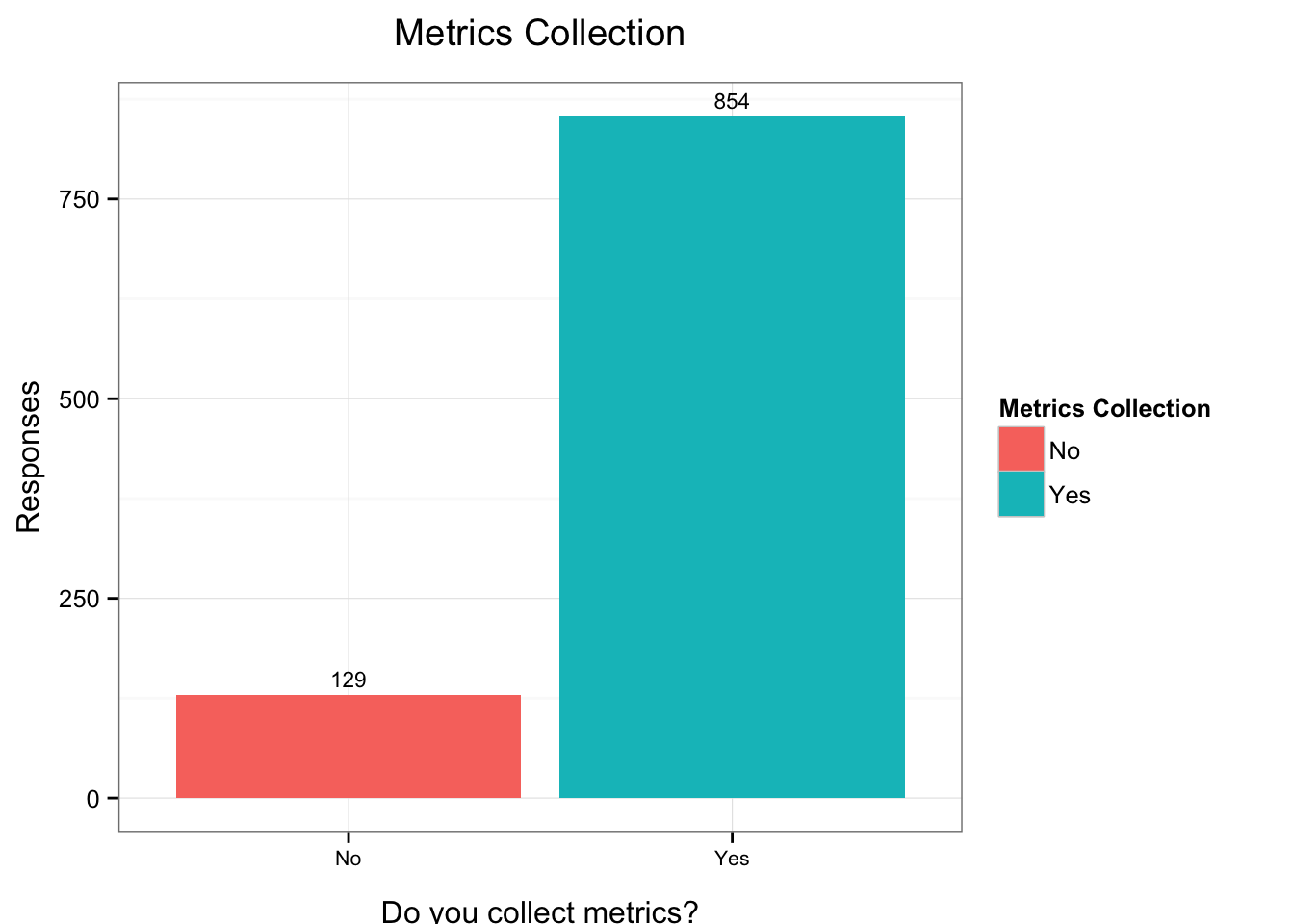 We can see that the overwhelming majority, 88% in fact, of respondents collect metrics (slightly down from 90% last year). That continues to be a pretty conclusive indication that metrics matter.

I also broke the responses down by organization size. I was curious to see what size organizations collected the least metrics. 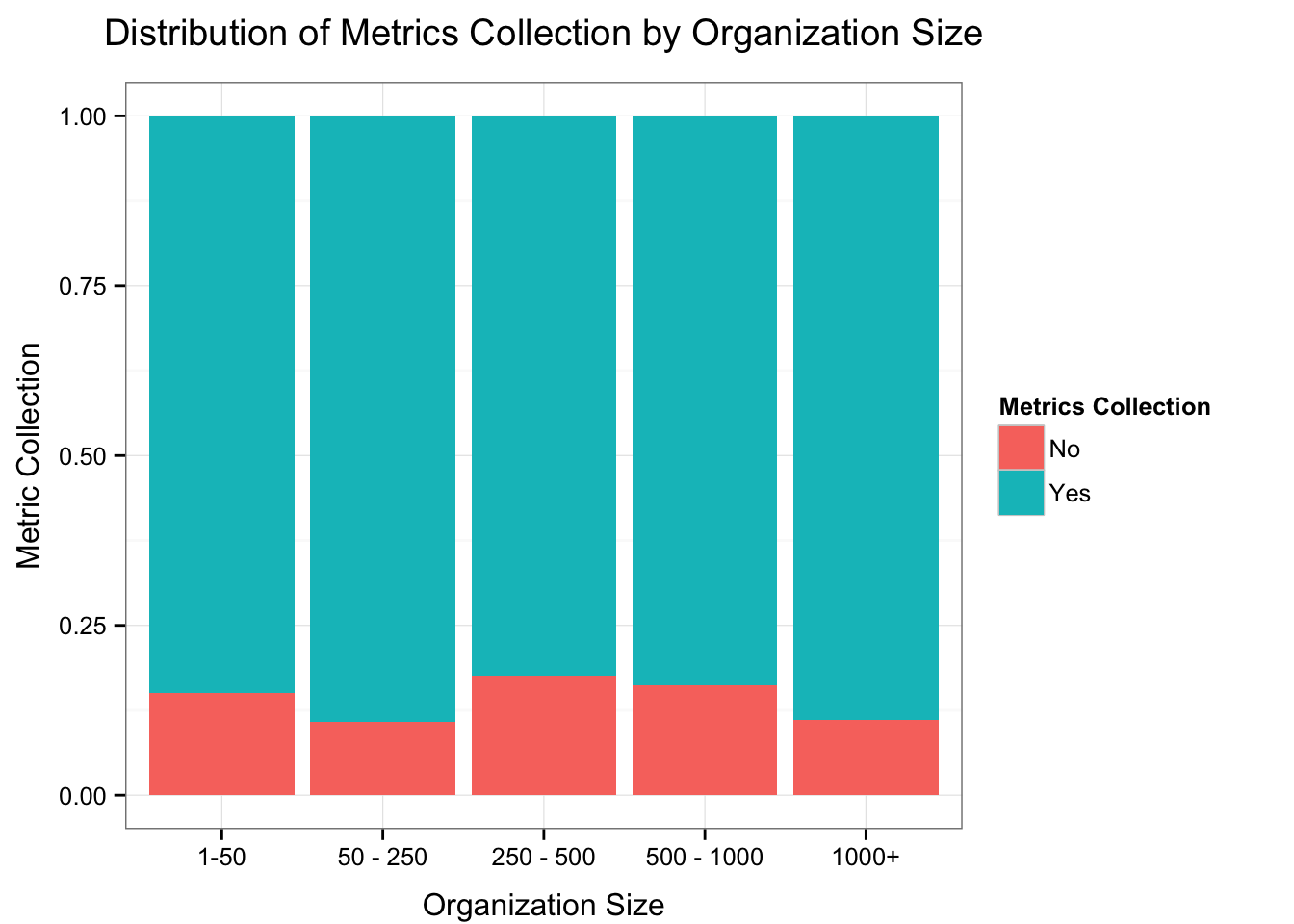 We can see that there a pretty even distribution of people that do not collect metrics across organization size.

I also asked respondents to tell me about the tools they used to collect metrics. There was a choice of potential tools and an Other option. The choice of tools included: 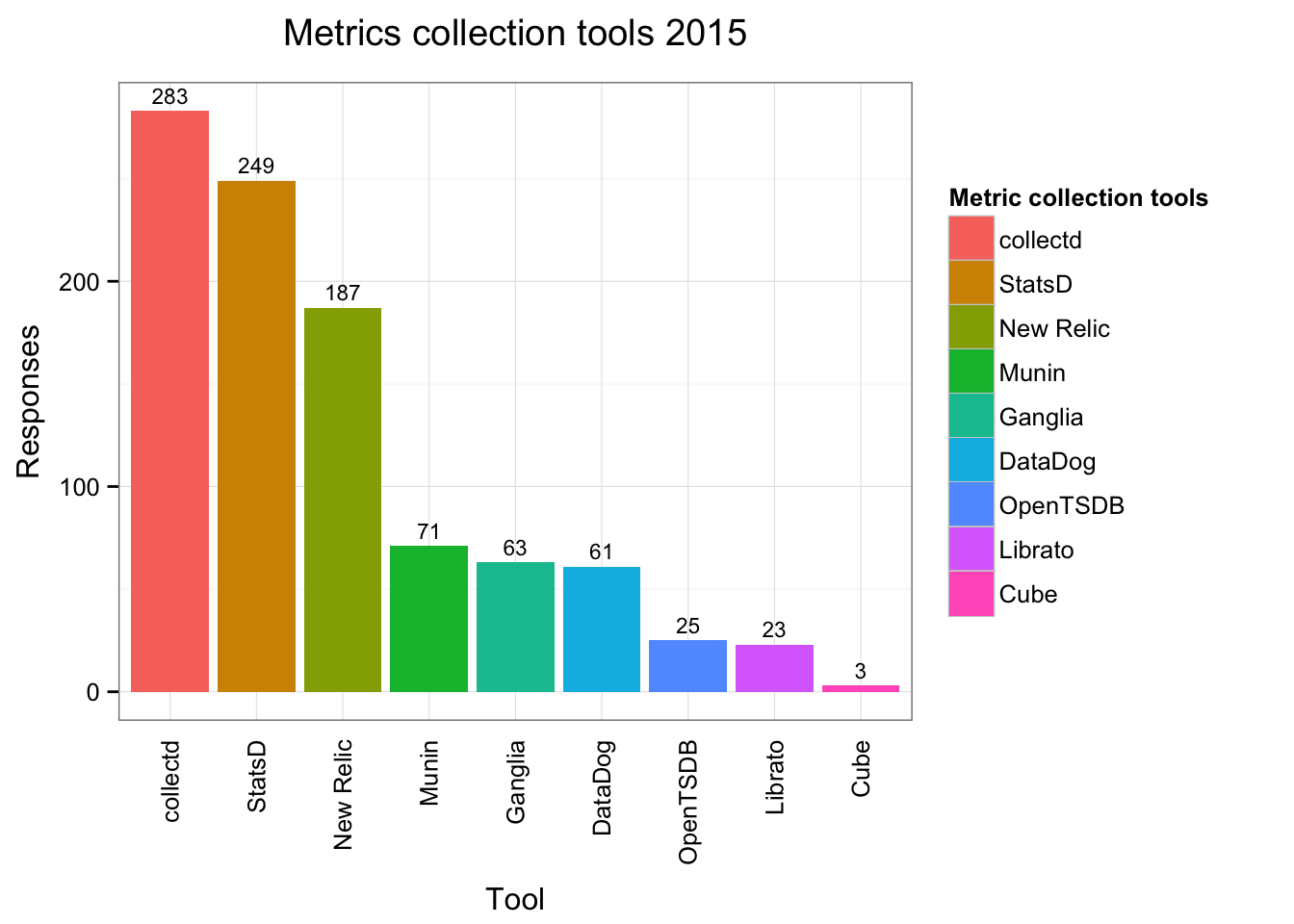 We can see that both collectd and StatsD are heavily used with New Relic coming in third, in keeping with the data revealed in the tool analysis results.

The results of the Other question was also interesting. I’ve only included tools that occurred more than once to keep the list manageable.

The high number respondents building their own metrics collection tools (77 reported having in-house tooling) is interesting. It potentially suggests that there is still a segment of the market that isn’t happy with the available tooling out there.

Also interesting was the support for Diamond, a Python-based metrics collection tools originally written by the Brightcove team and now maintained as a separate open source project.

We also asked respondents to name the tools they used to store metrics. The options for the question included:

There was also an Other option we’ll report below. 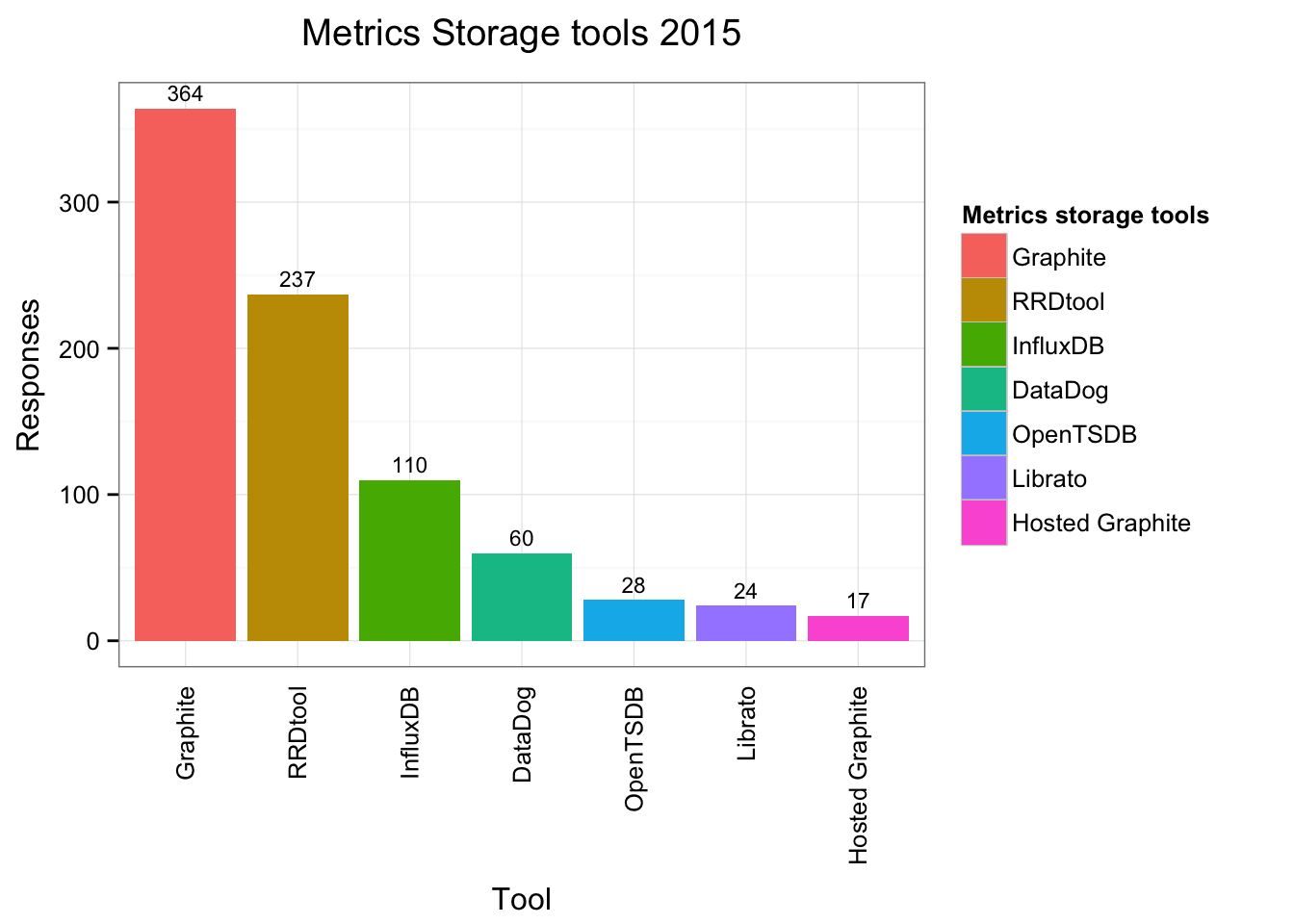 The clear winner here is Graphite. As one of the longer standing tools in the metrics space it’s not overly surprising it is so well represented. Also present in large numbers is RRDTool, an even older tool in the metric’s space. The newer generation of tools is represented by InfluxDB.

These are the responses to the Other option. I’ve only included tools that occurred more than once to keep the list manageable.

Interesting to note here is the people using the ELK stack and in-house tools to store their metric data. I’ve been seeing a lot of tools and services converting data and metrics into Logstash’s JSON format and using Logstash as a filtering router and Elasticsearch as storage.

Respondents had a choice of the following tools:

Respondents could also select an Other option and specify other tools. 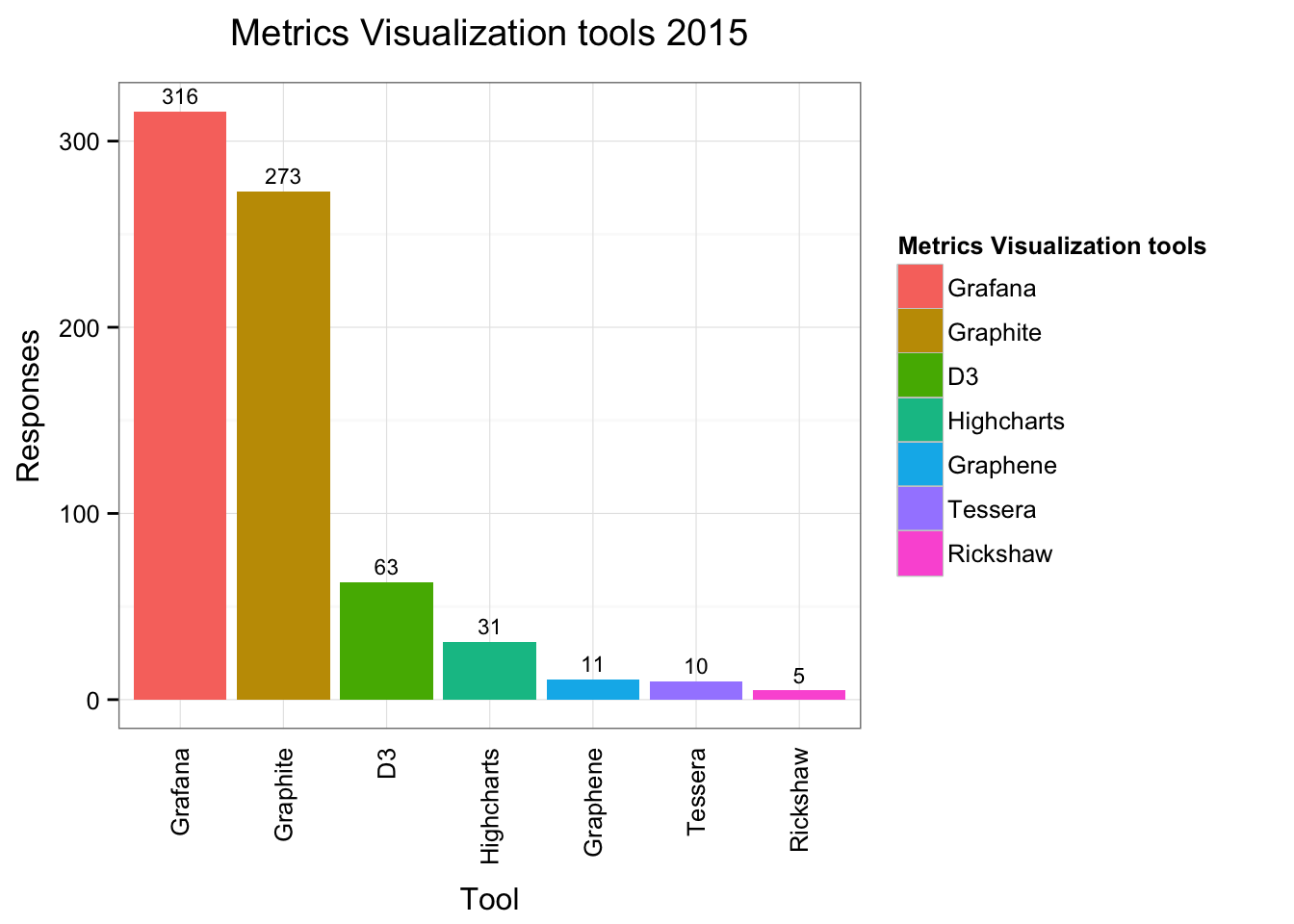 Here Grafana is a clear favorite. Likely given its ability to sit on top of Graphite, InfluxDB and OpenTSDB. The next largest tool was Graphite itself and then, with a long drop-off, the D3 Javascript framework.

These are the responses to the Other option. I’ve only included tools that occurred more than once to keep the list manageable.

Again present are a lot of in-house tools and the ELK stack in the form of Kibana. Given the presence of lots of Nagios users it’s also not a surprise to see pnp4nagios represented.

The purpose of metrics collection 🔗︎

I also asked respondents why they collected metrics. As with last year I was curious whether respondents were collecting data for performance analysis or as a fault detection tool. There’s a strong movement in more modern monitoring methodologies to consider metrics a fault detection tool in their own right. I was interested to see if this thinking had grown from last year.

Respondents were able to select one or more choice from the list of:

If respondents selected “No”, that they did not collect metrics, the previous question logic skipped them to the next question.

I’ve produced a summary table of respondents and their selections.

I also summarized the Other responses as a table

P.S. I am also writing a book about monitoring.