In an earlier post I talked about my recent monitoring survey and the demographics of the survey. In this post I am going to look at the primary monitoring tools specified by respondents.

As I’ve mentioned in previous posts, the survey got 1,016 responses of which 866 were complete and my analysis only includes complete responses.

Every respondent was required to answer question five. The intent of the question was to identify the primary tool that organizations most identified with monitoring. I was interested in understanding what tool came to mind first when someone was asked about monitoring. The question did provoke a few comments from people who struggled to name only a single tool. It may have also contributed to the large Other response but there was some expectation of that given the huge pool of monitoring tools in the market. I think, however, that overall the question was successful in highlighting the key products used.

This graph shows the primary tools selected. The clear winner is Nagios. In second place is Other (see the data from that below). This is followed by Nagios derivative Icinga, then Sensu, Zabbix, and the software-as-a-service monitoring service New Relic. 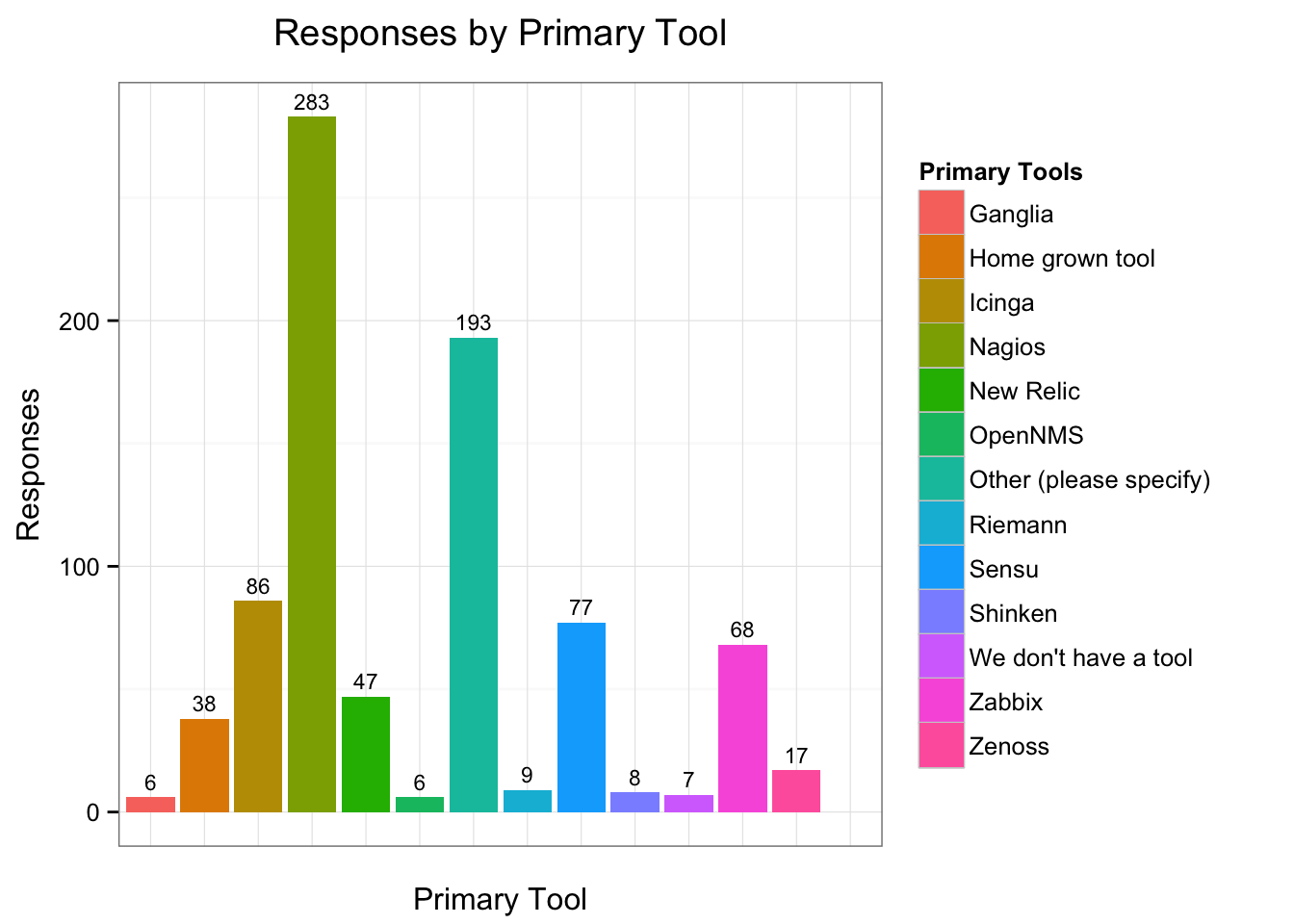 The results don’t provide any particular surprises. Nagios has anecdotally been the dominant tool in the monitoring space for some time. Of interest is the popularity of Sensu. I plan to rerun the survey again next year to see if Sensu use has grown. Also interesting is the continued use of Zabbix, which is almost as old as Nagios.

That both Nagios and Zabbix are still in play in a significant number of organizations is interesting. It could demonstrate the continued technology sustainability of both tools but I am skeptical. My suspicion is that their continued deployment is more:

a) The inertia of existing monitoring environments. It’s traditionally been a service with limited incentive for change.1

b) There’s a heavy sunk cost in monitoring. Monitoring environments are complex and deeply embedded in operational process.

In contrast perhaps, New Relic’s presence as a primary monitoring tool may be a sign of the changing landscape of monitoring. New Relic is software-as-a-service and hence not a traditional on premise/behind the firewall tool. New Relic is also highly application-centric rather than infrastructure-centric like most of the other tools on the list. 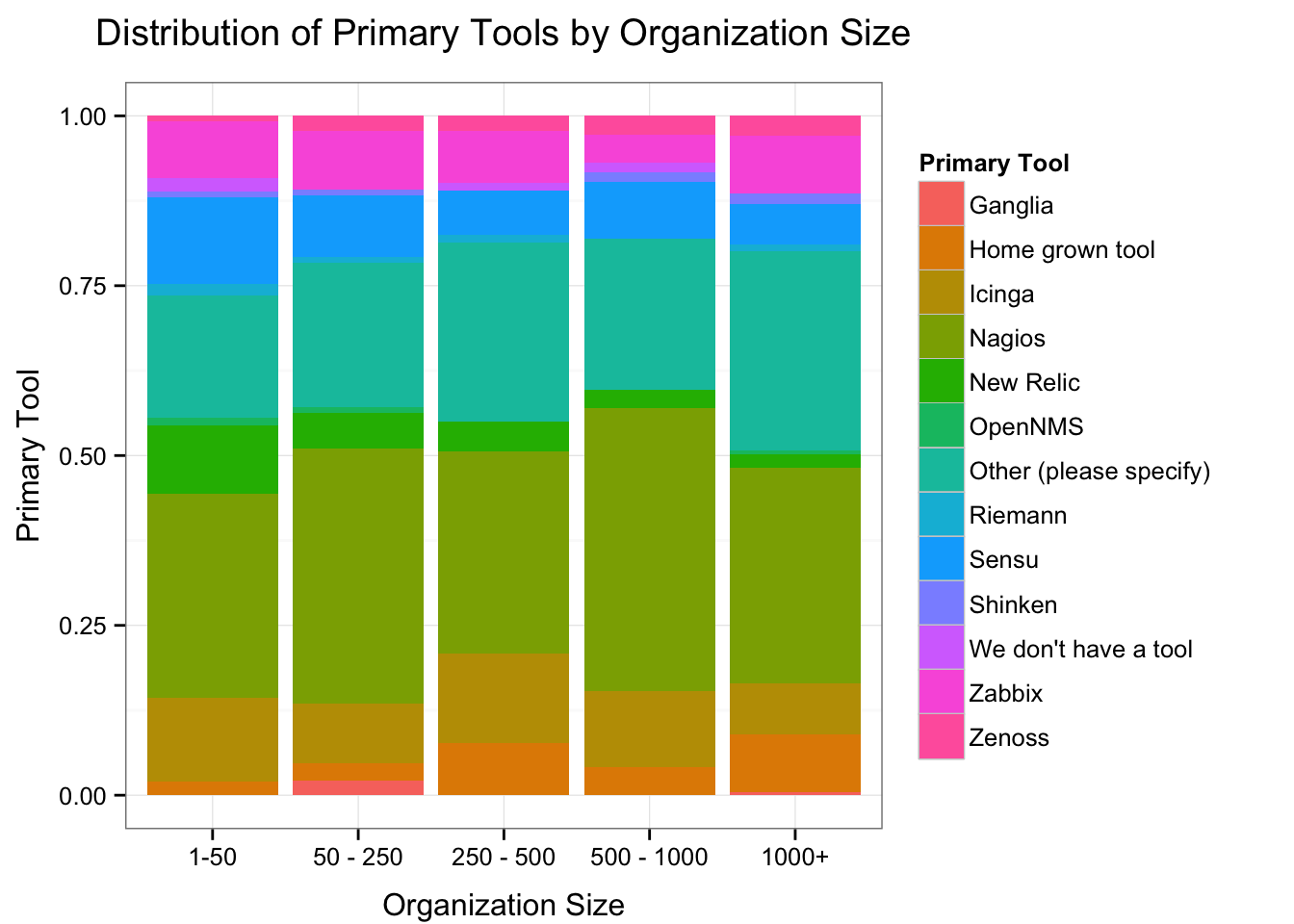 Here the higher percentage of New Relic users in organizations of 1-50 people is particularly interesting. Smaller companies tend not to have dedicated operations staff (indeed you can see the larger number of responses from developers in the 1-50 organization size in the demographics analysis) and hence developers tend to be responsible for operational tasks. A consequence of this may be the selection of an application-centric tool in larger volumes in those organizations.

Additionally, the largest block of Sensu users is also in the smallest organizational unit.

The breakdown of the Other category (193 respondents selected it) is interesting. I’ve compiled a table with a roll up summary of the tools selected. It was also here that there was a small amount of commentary on choosing just one tool rather than many. Clearly my articulation of the reasoning around choosing a primary tool should have been stronger.

Given New Relic’s strong presence in Primary Tools, it is also interesting to see that DataDog and AWS Cloudwatch also appear strongly (13 and 9 respondents respectively) in the Other results.

The other strong results were for Centreon and Opsview, both of which are Nagios derivatives with commercial offerings and Xymon, the open source derivative of Big Brother (now owned by Dell). Lastly, Microsoft’s System Center Operations Manager or SCOM also made an appearance.